You are here: Home / Recovery from Abuse Resource Center / Prenatal and Infant Abuse

Tobacco smoke is widely believed to be the most common and dangerous of the environmental toxins to which children are exposed. It is connected with a wide range of childhood conditions such as respiratory tract infections, asthma, otitis media (middle ear infection) and sudden infant death syndrome.

Alcohol consumption during pregnancy can impede fetal growth. It can also lead to congenital anomalies and to mental retardation. In several states infants born with this syndrome must be reported to protective services. FASD is the largest preventable cause of mental retardation and birth defects. FASD affects 1 in 100 live births or as many as 40,000 infants each year in the US. 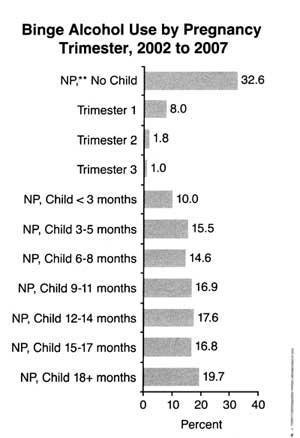 Source: SAMHSA, Office of Applied Studies (May 21, 2009). The NSDUH Report: Substance Use among Women During Pregnancy and Following Childbirth. Full report available here.

Effect of prenatal cocaine use on physical growth and development appears to be less detrimental than was once thought. It now seems probable that it’s impact is less than that of tobacco or alcohol exposure. Cocaine exposure does not appear to cause birth defects, does not increase the risk of SIDS, and may not have any effect on IQ of children.

Shaken Baby Syndrome (SBS) results from the violent shaking of an infant or small child. Roughly 25-30% of victims who show up in the medical system die as a result of their injuries. It is probably very underreported both because victims do not always display visible evidence of physical trauma and because it may be difficult for health care providers to distinguish Shaken Baby Syndrome from other forms of physical trauma (falling out of bed etc.).

Munchausen Syndrome by Proxy is a pattern of behavior in which caretakers deliberately exaggerate and/or fabricate and/or induce physical and/or psychological-behavioral-mental health problems in others. Most common in parents of infants or toddlers.

Ten to 20 percent of new mothers develop a full-blown clinical depression, which can last from two weeks to as long as a year. Depression is a signifcant risk factor for childhood neglect.

Boarder babies are infants under the age of 12 months who remain in the hospital past the date of medical discharge. Boarder babies may eventually be claimed by their parents and/or be placed in alternative care. Abandoned infants are newborn children who are not medically cleared for hospital discharge, but who are unlikely to leave the hospital in the custody of their biological parents. Discarded infants are newborns who have been abandoned in public places, other than hospitals, without care or supervision.

Homelessness and Neglect of Infants

One quarter of the homeless population in the US are families with very young children. Infants without proper shelter are obviously at high risk for physical neglect. Interesting culpability questions arise. Is it the parents who are responsible? A culture that tolerates homelessness? Bottom line: trying to understand abuse outside of it’s social context is probably a serious mistake.

At both ends of the life cycle (abortion and euthanasia) you find highly contentious issues of many kinds. The language of abuse (abuser, perpetrator, etc) tends to become highly politicized in these contexts. For some people, removing a blastocyst from a uterus is a form of child murder. Others argue that forcing an adolescent to carry to term an unwanted pregnancy resulting from rape is a form of child abuse. I do not intend to explore these contentious issues in this context. It would be worth a few moments, however, to reflect on why there is enormous public interest at the extremes of the life cycle but a comparatively lower level of interest in abuse during other life stages.

The extent to which aggressive medical intervention is appropriate with newborn infants with multiple congenital abnormalities is a matter of considerable contention. In particular, the extent to which ‘quality of life’ assessments ought to play a role in such decisions is highly contentions — some seeing any such role to be a kind of abuse by medical neglect. Legislation passed in the 1980’s (Federal Child Abuse and Neglect Act) sought to provide some guidance for these matters but in all probability such difficult and complicated decisions will continue to remain difficult and complicated.