You are here: Home / Uncategorized / The Recovery Church 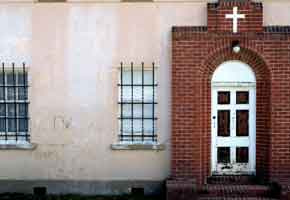 an interview with Don Smith

Another development in the last decade has been the emergence of Recovery Churches. These are not just churches that have added recovery groups to their other programming but are churches that seek somehow to make recovery a central feature of their identity. The specifics vary from congregation to congregation. We talked to Don Smith, pastor of Christian Recovery Fellowship in Dryden, Maine, to find out more about the Recovery Church.

STEPS: You have been pastoring at your current church for almost a decade?

Don: Yes, the church was an independent charismatic church when I accepted a position as pastor almost nine years ago. It had a healing emphasis–which is one of the reasons we came to the church. I had started my own recovery about a year before we came to the church so we were hopeful about that emphasis. It turns out that the pastor before us apparently had a lot of unresolved control issues and left behind a lot of pain and chaos. There were two church splits in the first two years of our ministry here! It was a long time before we could do much more than just try to deal with all that pain. It has just been in the last year or so that we have really been able to focus on being a recovery church. We used to get most of our visitors from charismatic or Pentecostal type churches. They would come for a while but they wouldn't be really safe for the people who were already here because they weren't working on their own issues. Usually they didn't stick around because they didn't really want to work on their issues. So over a year ago we recognized in a new way that we were not your typical church—that's when we changed our name to "Christian Recovery Fellowship" and started to say clearly that we were a recovery church.

STEPS: What is a recovery church? It's not just adding recovery programs to an existing church, right?

Don: That's right. It's a whole new way of approaching church. The foundational thing is a real big emphasis on grace. That might not sound shocking but it turns out to be an emphasis which is quite contrary to the Christian culture in which we live. For example, having a foundation of grace eliminates the need for judging other people. It puts us all on an equal footing. We are all just sinners saved by grace. We are all going to struggle. We are all going to have sins–whatever they look like. The focus is not on what our sins look like, but on receiving from the Lord his love and grace and acceptance. This is what helps us get to the roots of what is causing us to sin. Grace is what eliminates all the religious stuff that people get into: judging, having first-class Christians and second-class Christians, figuring out who is doing it right and who is doing it wrong–all that kind of stuff.

STEPS: Sometimes when I talk to pastors about recovery ministry they express some anxiety about developing programs that might attract too many needy people to their congregation. The fear is that the congregation might get a reputation in the community as being the church for broken people. And then maybe the healthy, happy families won't want to come to your church.

Don: [pause] I just don't know many healthy, happy families. The families I know who are the healthiest are the ones who have done a lot of work in recovery. So they have a capacity to be honest and deal with issues. A lot of churches put a mask on so that they can have a good image. I think that's what a typical church would call a ‘healthy, happy family'–one that comes to church and tithes and smiles and looks good. That's been my experience with the churches we have been a part of. The people we wanted were the ones who could perform, who could do the programs. But that is not necessarily what healthy looks like.

STEPS: What can you do to make church a safe place?

Don: It is really, really important for the leadership to be vulnerable about who they really are and the things they really struggle with. One of the biggest blessings I have is the way Hollis, my wife, leads our worship services. She leads from a real vulnerable place and talks about her struggles and talks about how God meets her in the struggles. It really opens up the service a lot so that people know that it's okay to be struggling. It's okay to be honest. It's even okay to be angry with God if that is where you are right now. It's okay to express those kinds of things. You are not going to get judged.

STEPS: It seems to me that you necessarily develop a very different kind of pastoral identity in a Recovery Church.

Don: I think the biggest change for me is that I now use the ministry as an opportunity to work on my own issues. God is using the ministry to get at the roots of my issues so that he can set me free. I'm not here to fix people, to build the church, to be successful or to build the budget—all those typical things that I used to think were so central to being a pastor. I am here first of all for my own recovery, and secondly to give away whatever the Lord has given me. If people get it, great. If not, that's okay too. I have a lot of freedom around that. Someone asked me a few weeks ago "how's the church going?" My first response, which came from my old shame-based identity, was "we've got some new visitors coming." But that's not really the paradigm I want to work from at all. I don't think numbers are any indication of success. I think that most of the training we get to be pastors, and more generally to be Christians, is really training to be codependent. It is about rescuing people, fixing people, getting people to perform—getting them to do what you need them to do so that you can look successful. It doesn't really have much to do with loving people or reaching out to people. It has a lot more to do with "I need this church to look good so that I can feel good about myself."

STEPS: My experience has been that the average person in recovery who visits a local church finds little to interest or attract them. Even people who have worked hard for a couple of years on their issues and have started to focus seriously on increasing their conscious contact with God are usually treated like someone who has not yet begun the spiritual journey. God has already done all this amazing stuff in their lives and they have a thirst for more but they get treated as "not yet one of us."

Don: Absolutely. We had some visitors last week and the guy had been in AA for a long time and been sober for 5 or 6 years. The sermon I gave that day was on what it means to "let go" and what it's like to grieve as part of that process and being able to trust God as part of that process. He came up afterwards and had tears in his eyes because so much of what I had experienced and shared was similar to his own experience. We had a lot of common ground. The people who find our fellowship to be most helpful are either going to be Christians in recovery who haven't been accepted in any other church or people who have been in recovery who are trying to grow in their relationship with God. It's really an audience that is not at all attracted to your usual congregation.

STEPS: What sort of advice would you give to a pastor who is where you were ten years ago—fairly new to recovery themselves but who wants to lead a congregation in this direction?

Don: Two things pop into my head. Number one is: go really slow. No sudden changes. And the second thing is: get lots of support for your own recovery.

STEPS: How do pastors get support for their own recovery?

Don: That is a really good question. One of the things I think we really need is support groups for pastors in recovery. Suppose you have a dysfunctional family and you take one person out and get them some help and then send them back into the same family. One of the three things will happen. Either the whole system is going to change or it is going to blow up or the person is going to revert back to their old ways of doing things. That's what happens with pastors. They get into a crisis, hit bottom, realize they need help. They get a little bit of help and then they go back into a dysfunctional system. Either things blow up or, unfortunately more commonly, they revert back to business as usual.

STEPS: I know you have been involved in leading an on-line group for pastors at the Clergy Recovery Network website and are eager to develop networks for pastors in recovery.

Don: I think this will be an exciting part of the next decade. When you start getting leaders in recovery together there is such a strong bond. It's really powerful. A lot of the help I got for my codependency issues was in a secular group. I didn't know for a long time that there were other pastors dealing with their issues. I knew there were other Christians—but I didn't know there were other pastors. When I went to clergy gatherings all I could see were the masks. If you were really struggling with depression or feeling awful about yourself for having a bad day in your marriage, it's not the place you would want to bring that up. The typical assumption when pastors get together is "we are the leaders and we need to have our act together." I can remember several years ago going to a pastor's meeting and each person talked about their evangelistic programs and how many people were coming to their churches. I sat there thinking that nothing here was real. It was not even a month later that one of the pastors in that group left his wife and his ministry to be with one of the church secretaries. Can you imagine sitting in a meeting talking about programs and church growth when you were in that much pain? Developing recovery resources for pastors needs to be a high priority!