You are here: Home / Recovery from Abuse Resource Center / Impact on Abused Persons

How the experience of abuse impacts an abused person is very difficult to predict.

It seems self-evident that some abuse is more severe than others — but there is no way to be precise about this and the business of comparing severity of trauma is notoriously risky. For example, it seems self evident that both frequency of abuse and intensity of abuse contribute to the impact: 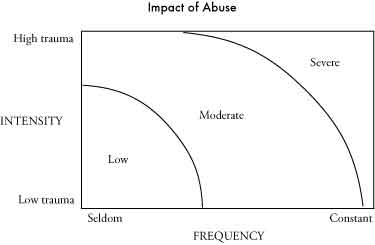 But there are risks to such generalizations. The impact of a single abusive event which might not seem like ‘high trauma’ to others can be a life-altering event to an abused person. In part this is due to the fact that there are so many other factors involved. These could include:

The impact of abuse on the abused is also very diverse and difficult to predict. Judith Herman in Trauma and Recovery (Rivers Oram Press, 2001) lists six general categories of long term consequences from abuse. These are:

It would be a mistake to see even this list as comprehensive. I can think of several other impacts of abuse which don’t fit in any of these categories.

Another very helpful categorization of the long term effects of abuse comes from Patrick Carnes in his book The Betrayal Bond: Breaking Free of Exploitive Relationships (Health Communications, 1997):

There are many other ways to think about the impact of trauma or abuse. It is important to note that effects are not only variable but sometimes contradictory. For example, both sexual promiscuity and sexual anorexia can be symptoms of sexual abuse. Both boundary-less-ness and rigid, inflexible boundaries can be symptoms of physical abuse.