You are here: Home / Archive / A Size-7 Forever 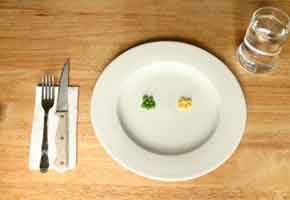 I surveyed the image in the mirror, backing up so I could get a full-length objective view. I critically eyed the long, bony legs with thighs and calves nearly matching in thinness. Above them were protruding hip bones that acted like hooks for my shorts to hang on.

I was 22 years old, stood 5’8″ and weighed 94 pounds. Still staring at the mirror, I pinched a line of flesh from my stomach. “Pinch more than an inch and you need to lose,” I reminded myself. The mirror was right, five more pounds.I stretched and felt the room start to spin. I had lost both breakfast and lunch and had had about six cups of coffee to fill the hole in my stomach. I took hold of the doorknob to steady myself until the fuzziness faded. When it did, I looked at my face and was startled by the intense haunted look of my eyes. I glanced away. “Five more pounds,” I thought. “Just five more and I would be perfect.”There was an hour until supper. I could start studying for my philosophy exam. That wasn’t too pleasant a thought. What would be nice? Some popcorn with the philosophy. The thought was warm, comforting. Better than popcorn would be corn chips. Corn chips and maybe just a few cookies. But, come on, what I really wanted was donuts.

I could feel it beginning, the desire that soon became a growing, pulsing rhythm of demand. “No,” I thought, “I can’t. I promised myself not again today. No more. I vowed I wouldn’t. I told God I wouldn’t. There’s no money. There’s not enough time.” I started counting change, going through my pockets, scrambling along the closet floor feeling for nickels, pennies, anything. I had barely enough. The relentless demand to fill that cavernous hole consumed my every thought. I grabbed my coat. As I whipped open the door, I caught another glimpse of those wild haunted eyes. There was no choice. I had to do it.Later, I drove slowly to a building on campus that would be deserted this time of day. I knew where all the bathrooms were and their frequency of use. Aching and slightly bent over, I made my way inside. I had managed to get two dozen donuts for this round. The second dozen I had talked them into as a charitable donation to my grandmother’s nursing home. I had become so good at lying; it had become as necessary as manipulating and avoiding anyone who suspected what I was doing. Nothing mattered when the compulsion arose except to get enough food to fill it.After I had purged and cleaned up, I leaned weakly against the sink and began splashing cold water on my face. “Why did I do it?” I wondered. For almost four years, I had been experiencing the bewildering downward spiral into bulimia and anorexia nervosa. I was lonely. I was frightened. I was vomiting up to ten times a day and didn’t know if there was a way out of the madness. Finally, I turned to a compassionate school nurse who saved my life. She had me hospitalized and with counseling, I got up to 105 pounds.

Without her help, I doubt anyone would have understood how serious the problem was. The people around me saw a bright, attractive college senior, a real go-getter. Inside, I was the little girl who believed she’d be lovable if she could just be perfect. Those beliefs started early. I had grown up in a Christian family with a lot of secrets. Both of my grandfathers were alcoholics. When I was a teenager, my 19-year-old brother got involved in drugs and the family strain became enormous. Both my parents had what were then called “nervous break downs” and my mother was hospitalized. If people from church called, I said she had “back trouble.”As my mother’s depressive episodes increased, I became the scapegoat. Now, I understand that she had a chemical imbalance problem. Back then, I didn’t have any explanation for the problems, I just tried to make everybody happy by earning whatever I hoped they might want from me: grades, honors and awards.I went off to a Christian liberal arts college determined to achieve even more. Whenever I argued with my dad during those years, he would tell me, “Go back to that school with the rich kids whose dads are big shots!” So I figured, if I did even better than the rich kids, Dad would love me. After I graduated summa cum laude and won several awards, my father came up to me and said, “I’m glad you finished college.” That was it; the prize for which I had invested so much effort!After graduation, I completed conservatory theater training and moved to Texas where I became a member of the resident company of the A.D. Players, a professional Christian theater company. I hovered between 105 and 110 pounds, but I still binged at least twice a day and struggled with feelings of hypocrisy and guilt. How could I be sharing about the power and love of God in a theater ministry when in this area of my life, I was a cripple?

Then at age of 29, I walked into a Bulimia/Anorexia chapter of the Overeaters Anonymous in Houston and met slim, attractive, professional women who said they were eating three meals a day and not binging or purging anymore. I desperately wanted what they had. This time, I would do whatever it took to be well. I would risk gaining weight. I would risk losing a size seven forever, if only I could be well. I told God I would do whatever I had to do to be well and asked for his help to do it. That was the beginning.I started the Twelve Step Program. I went to meetings. I got a sponsor. It took two weeks before I could get through a whole day without binging. I had been a bulimic for ten years and it took a long time to stop using food as my response to life: to numb pain, to deal with joy, to ease loneliness and to fill that everlasting hole of needing to be loved. After a while, I switched from the group to working out an accountability program with one friend. Then one day on tour with my theater group, I slipped badly. Miserable, I stepped outside to look at the mountians and cry to God, “What will it take for me to be free?” That is when I had a truly mystical experience. From the top of my head to the soles of my feet, I felt flooded with God’s love. Before, I’d seen God as absent and disapprovong like my parents. But suddenly, I understood that God’s unconditional love meant that he loved me just as much when I had my head hanging over the toilet as when I was having a good day.At that moment, I started the biggest step in my recovery – starting to love and forgive myself. I started to embrace the wild, crazy part of me that wanted to eat everything in the whole refrigerator. I’d always tried to beat that part of me to the ground. I had to love that part of me I called the “beast.” This new view of myself also started changing my relationships. Eventually, I started dating Jim Shores, a fellow actor, and last summer we married. Within a few months of that day on the mountain, the desperate compulsion to binge and purge faded, and has not returned. I have to add, however, that recovery doesn’t mean that the thing which has been your life’s consuming passion (in my case, food) just leaves. I understand that I can’t have brownies sitting around the house. I understand that I’ll get anxious when I have a bathing suit scene on stage, especially when I’m portraying a 25-year-old character with my 35-year-old body! I can use those experiences – all of my own pain and joy – when I do this work.

When I think of that skinny girl looking at the mirror in her dorm room, I wish I could somehow step through time, hold her to me and tell her what I know now. But the long painful route she took has led to where I am today, a place I wouldn’t trade for all the size sevens in the world.