You are here: Home / Archive / Men’s Issues: Making It Through the Minefields Part 1 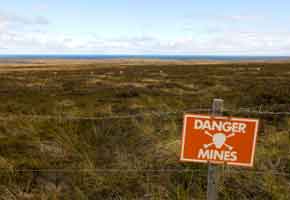 Seven years ago last month I was at a conference site in central Europe, attending training sessions for the Christian organization with which I served. I was awakened in the middle of the night by the ringing of the phone next to my bed. Even half-asleep I could hear the strain in my supervisor’s voice: “I need you to come to my room immediately. It’s serious.”

The next four hours were the start of a nightmare: confrontation over the discovery of my extramarital affair, immediate dismissal from the ministry in which I had served for almost twenty years, and the beginning of a wilderness period that included divorce and the loss of my family.

I got into counseling, found a support structure of other Christian leaders, and began to work on my own personal recovery. More than anything else I wanted to find some answers to the question ‘How could this have happened to me?’. That led to a five-year study of the factors that can lead to crisis in the lives of otherwise dedicated Christian men.

A sobering picture has emerged from the confidential surveys I take in my “Manhood Without Models” seminars for men: burnouts and “blowouts” affect one out of every two men in our society; more than 60% of Christian men are involved in some type of secret sexual sin or addictive behavior; and forty percent own up to having had an extramarital affair since becoming a Christian.

But Christian men don’t have to become casualties in the wars that threaten their private lives. This series will look at three of the most dangerous minefields that criss-cross our journey through life as men, and the steps we need to take to traverse them.

Strength, Success and the False Self

The women’s movement has called attention to the way in which physical beauty has been used as the unfair standard against which all women’s worth is measured. But society also judges a man’s worth on the basis of external success. If a man makes a lot of money or has a prestigious job, he is valued, honored and rewarded far more than the man who doesn’t make much money and has a more menial job. In our culture, words like “loser”, “bum”, and “deadbeat” are all used exclusively for men. All of them are put-downs of a man’s worth based purely on the standard of external or vocational success. This pressure on men to succeed, to always look strong and competent, has at least three destructive results.

Drivenness, adrenaline addiction, and eventual burnout are increasingly the experience of Christian men today, even (or perhaps especially) men in the ministry and the helping professions. Author Tim Hansel in When I Relax I Feel Guilty talks about waking up one morning during the period in which he was ministering on Young Life staff and realizing that he had become a “sour, driven salesman of the abundant life,” and that, if someone were to peek in the windows of his house and see how he truly lived his life, that person would never want anything to do with the gospel he preached! That realization was a wake-up call for Hansel, and he began looking for ways to slow down and enjoy the journey more. Reflect on these three questions for a moment: Are you deeply weary with your work? Do you find yourself becoming increasingly callous with other people? Are your dreams gone? If you answer to all three is “yes”, you may already be sliding into burnout.

Growth Steps: For most men, dealing with a killer level of stress is primarily a matter of deciding whether or not you can live on less: less praise and recognition (for the bionic levels of achievement you attain), less money and fewer work hours in exchange for greater peace and more enjoyable relationships. Talk with you wife about the trade-offs. Meditate on Matthew 11:28-30.

2. An Erosion of Our Relationship With God

The emphasis on being (or at least looking) strong and successful runs directly counter to a virile spiritual life. King Uzziah was one of the most naturally gifted leaders in all of history. He became king of Judah at age 16, and went on to become a great warrior and city builder and statesman. But after listing a lengthy litany of Uzziah’s achievements, the writer of 2 Chronicles goes on to write this chilling epitaph to his career: “For [Uzziah] was marvelously helped until he was strong. But when he became strong, his heart was so proud that he acted corruptly, and he was unfaithful to the Lord his God. . .”

A little over a year ago, my wife and I started a new ministry of speaking and workshopping. As with any new endeavor, this start-up phase has been full of adversity and financial challenges. I hate adversity, and I hate being weak. I feel much better when I’m strong and successful. But I have to (grudgingly) admit that I’ve also had to depend on God as never before in a one-day-at-a-time kind of way, and that I’ve grown through the experience. I’m not suggesting that we exalt vocational struggle (or any other kind of hardship) to the level of a virtue. But the self-congratulatory smugness that often accompanies strength and success in our society can lead directly to the kind of spiritual deadness that Uzziah ultimately experienced.

Mediate on 2 Corinthians 12:7-10. How does being “weak” fit in with your own view of what a man should be? What masculine qualities are required to live out the attitudes Paul expresses in verse 10?

See: Part 2 of “Men’s Issues: Making It Through the Minefields”