You are here: Home / Center for 12 Step Recovery / Step Eight 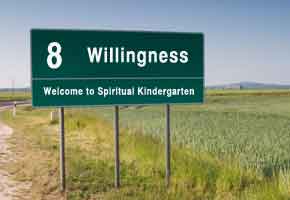 by Dale and Juanita Ryan

It had been embarrassing enough when in confidence we had admitted these things to God, to ourselves, and to another human being. But the prospect of actually visiting or even writing the people concerned now overwhelmed us, especially when we remembered in what poor favor we stood with most of them. There were cases, too, where we had damaged others who were still happily unaware of being hurt. Why, we cried, shouldn’t bygones be bygones? Why do we have to think of these people at all? These were some of the ways in which fear conspired with pride to hinder our making a list of all the people we had harmed.

In Steps Eight and Nine we learn that the way out of the pain of separation is through that pain, not around it. Instead of justifying ourselves, we own our hurtful behavior specifically. Instead of burying what we find, we go to the person we have offended, confess the behavior, and make amends. For those of us who have always hated to be wrong and have been terribly afraid of rejection, this is a very frightening prospect. When I had been in the program long enough to be at Step Eight I had heard many people talk about the serenity and restored relationships that came from doing Steps Eight and Nine, and I was at least ready to do Step Eight. I was desperately afraid of Step Nine, but my sponsor reminded me that I only had to do one step at a time; I could wait until I was ready–even if it took years. So I began Step Eight.

Many of the strategies we have used to manage our relationships have been unhelpful. When we have had problems in our relationships, we have pretended that the problems didn’t exist. Or we have avoided the people with whom we had conflicts. Or we have blamed others for all of the problems. Strategies like these have not led us to peaceful relationships. The Twelve Steps suggest that making amends is the most important thing that we can do to bring peace to our relationships. If we want to make peace, we need to set aside our tendencies to pretend, deny, avoid, blame, argue, forget, or evade. We need to replace these unhelpful strategies wherever possible with making amends. In Step Eight we begin the amends process by making a list of the people we have harmed and by becoming willing to make amends to them:

Made a list of all persons we had harmed,

and became willing to make amends to them all.

Making a list of people we have harmed can cause us to feel uncomfortable. We may experience feelings of fear, shame, and guilt when we start thinking about making amends. But there is no need to feel that doomsday is approaching. Making amends will, in some cases, lead us to restored relationships! The number of people who will greet our efforts to make amends with open arms may surprise us. Restored relationships will not always be the outcome. In all situations, however, there will be significant rewards for becoming willing to make amends. Making amends can make it possible for us to let go of some of the emotional burdens we have been carrying. We will gain the confidence that comes from knowing that we have taken full responsibility for our own behavior.

The first part of Step Eight is based on the work we did in Step Four. In Step Four we made a moral inventory of our lives. In Step Eight we revisit this inventory in order to make a list of the people we have harmed. As we start to make the list, our tendency may be to rationalize, minimize, or avoid some of our actions. We may think, Let bygones be bygones, or That was a long time ago, or Don’t make such a big deal out of it. We may think that people have forgotten about what happened. Regardless of our resistance or rationalizations, we need to make the list anyway.


Of All Persons We Had Harmed

It is normal in Step Eight to think about the people who have harmed us and what they did to hurt us. The spiritual growth that Step Eight makes possible, however, will come only if we focus on the behaviors for which we are responsible. For our own spiritual benefit we must focus our attention on how we have harmed others–not on how they have harmed us. The only sins we need to focus on and make amends for are our own. We can’t change what others have done to us, but we can become willing to make amends for what we have done to others.

We need to make amends even if our forgiveness has not yet proceeded to completion and even if we expect to receive responses that will be difficult for us. It is not reasonable for us to expect that all of our amends will be easy. Sometimes we need the willingness to make amends to people who have profoundly mistreated us and who are not likely to respond in healthy ways to our amends. The Bible is, however, clear about such situations:

“Love your enemies, do good to those who hate you, bless those who curse you, pray for those who mistreat you.” (Luke 6:27, 28)

In difficult cases, becoming willing to make amends may require us to “do good to those who hate” or to “bless those who curse.” We need, in such circumstances, to remind ourselves that we are not making amends to change someone else. We are not doing this for someone else. We are doing this for ourselves. We are making amends because we want to move on in life, to become saner people, and to find more serenity in life.