You are here: Home / Center for 12 Step Recovery / Step Nine 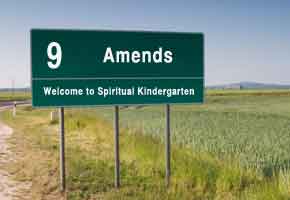 by Dale and Juanita Ryan

There may be some wrongs we can never fully right. We don’t worry about them if we can honestly say to ourselves that we would right them if we could. Some people cannot be seen–we send them an honest letter. And there may be a valid reason for postponement in some cases. But we don’t delay if it can be avoided. We should be sensible, tactful, considerate and humble without being servile or scraping. As God’s people we stand on our feet; we don’t crawl before anyone.

For our continued recovery and spiritual well-being, our making amends must in no way be contingent upon the other person’s response (except when to do so would injure him or her). We must overlook the perceived injustices we have experienced as well as see beyond the innumerable rationalizations we conceive to avoid this step. We must shatter every excuse that hinders the taking of this vital step in the path of recovery. What matters here is not what we are owed, but rather what we owe! Though we cannot control how our efforts at amends will be received by another, this step of restoration remains life or death to us; we must pay our pound though owed a million.

–Martin M. Davis, The Gospel and the Twelve Steps

Step Nine suggests that after we have identified the people we have harmed and have taken time to adequately prepare ourselves, we actually make amends for the harm we have done:

Made direct amends to such people wherever possible

except when to do so would injure them or others.

For many of us, making amends may be a new–and sometimes uncomfortable–behavior. Most people, however, find that the process is a deeply rewarding experience.

Direct amends are those we make to people whom we can contact personally. This includes family members, friends, creditors, coworkers and others. The kind of contact we make will vary from situation to situation. Meeting in person is the best way to make amends when this is possible. A letter or phone call is appropriate if a meeting is not possible. In some cases a personal meeting may be all that is required to complete the amends. In other cases, a personal meeting may be the beginning of a long process during which we seek to undo the damage we have done.

The importance of making amends is stated clearly in Scripture:

“When a man or woman wrongs another in any way and so is unfaithful to the LORD, that person is guilty and must confess the sin he has committed. He must make full restitution for his wrong, add one fifth to it and give it all to the person he has wronged.” (Numbers 5:6, 7)

What if direct amends are not possible? A person we have harmed may have died, moved away, or for some other reason become unavailable to us. If that is the case, it doesn’t mean we do nothing. If we caused economic harm to someone who has since died, we can still make restitution to his or her family. Or if that isn’t possible, we can donate the money to an organization that might have been helpful to the deceased. The important thing is to find a way to undo the harm we have done–or at least to make it clear by our behavior that we would undo the harm if it were possible to do so. Step Nine recognizes that it is not always possible to make amends, but for our own sakes, we need to be creative and persistent in our efforts to make amends before we decide that a particular amend is not possible. Indirect amends and partial amends are appropriate when full, direct amends are not possible.

Except When to Do So Would Injure Them or Others

It is possible for amends to cause additional injury. In these situations, we must carefully consider how to make the amends. Sometimes the potential for additional harm will be obvious. Suppose you had a sexual affair with someone, but the spouse of that person is unaware of the affair. You have done harm to that spouse. This person needs to be on your amends list, but making direct amends could obviously cause additional harm to both parties, especially if the spouse does not know about the affair. Our need to make amends does not justify interfering with other people’s relationships. Another kind of additional injury we need to be aware of is potential harm to ourselves. If the person on our list is actively abusive toward us and we have had to maintain strong boundaries to keep from being harmed, then making direct amends is probably unwise. If you are uncertain about what to do in a relationship that has been abusive, seek wise counsel before proceeding.

In addition to obvious kinds of additional harm, there are more subtle ways in which we can do harm by making amends. Suppose we go to a person we have harmed and say this: “I apologize for my part of the problem. I have confessed my sins, turned it over to God, and received God’s forgiveness. Now to make progress in my recovery I need your forgiveness, and I’m asking you to forgive me.” Can you hear the manipulative and controlling elements in this effort to make amends? It could easily communicate “I’ve done my part. Now it’s up to you. You must forgive me or suffer the consequences.” That sounds more like a threat than an amend! This kind of controlling behavior is another example of the way in which the poorly planned and premature making of amends can result in additional injury. We are not responsible for how people respond to our amends, but it is our responsibility to pay attention to the potential for additional injury that amends can cause. If we prepare ourselves poorly–or if seek to make amends before we have really “become willing”–then additional harm will result.

The bottom line is this: Step Nine invites us to develop empathy–the capacity to anticipate how others will be affected by our amends. This is exactly the quality of character that we lacked at the time that we did the harm we are now seeking to undo. The principle involved here is a biblical one: “Each of you should look not only to your own interests, but also to the interests of others” (Philippians 2:4).