You are here: Home / Center for 12 Step Recovery / The Practice of Sponsorship 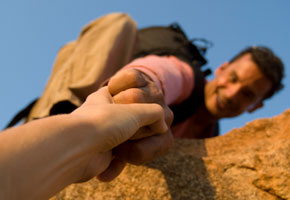 One of the most difficult parts of being a Twelve Step sponsor is watching people relapse. So often we give out our phone numbers at meetings to promising newcomers and then never hear from them again. Of those few who do call, only a small portion actually want help and stick around long enough to get it. Of that small portion that asks for help, most stop their progress at some point in the Twelve Step process and disappear. Exceedingly rare is the individual who actually works all Twelve Steps and stays around to sponsor others.

“Going off the radar” we call it. One day we have a sponsee working hard on their recovery and checking in regularly; the next day they are gone without a trace. Usually there is some signal that a disappearance is coming, but not always. The Steps are hard. Spiritual change is hard. This process requires a great deal of us, and most people would rather look around for something easier instead. Who can blame them?

Because fully successful sponsees are so rare, sponsorship can often be a lesson in humility. Anyone who comes to the task of helping others with the idea that they are important enough to be responsible for whether a sponsee will recover or relapse is in for a painful ride. As sponsee after sponsee goes off the radar, such sponsors are left alone in a pit of self-induced guilt. The truth is that we are powerless over addiction–our own and everyone else’s. Only God has the power to change lives, and even God lets the choice rest with the individual addict. We have to become willing before God will change us. Millions fall away because, on some level, millions want to. They prefer relapse to spiritual change, and none of us has any right to stand in their way. We can only be of assistance to those who ask, and the only help we can offer is to point them toward their own relationship with God.

From this perspective, the sponsorship process becomes a gift. We get to watch people struggle toward Grace, usually failing, but sometimes giving in enough to change. We don’t have to push or prod our sponsees toward some preconceived standard. Instead, we get to witness the unique workings of the Spirit in each one. Once we learn the lesson of humility that sponsorship has to teach, we realize that sponsorship is about learning to entrust another person’s life into God’s hands.

In this issue, Hamilton B. answers some basic questions about sponsorship in “What Does a Sponsor Do?” This article, an excerpt from Twelve Step Sponsorship: How It Works (Hazelden, 1996), is perfect for anyone seeking a sponsor. Hamilton’s suggestions about what a sponsor does and does not do should point those in need in the right direction. In “The Art of Sponsorship: Beyond the Basics,” Margaret Bullitt-Jonas presents the wisdom of her experience as a Twelve Step sponsor. Margaret’s article will be particularly useful to those looking to improve their practice of sponsorship, as it offers insight into essential skills such as listening and clarifying expectations. Our final piece is a story told by Frank Buchman, founder of the Oxford Group. AA arose within the context of Buchman’s life-changing groups. In The Making of a Miracle, Buchman tells of one of his early experiences in personal evangelism before the founding of the Oxford Group. We hope these articles will encourage you to see the hard work of sponsorship as a means of Grace.