You are here: Home / Center for Recovery Ministry in the Local Church / A Theology of the Cross for People in Recovery 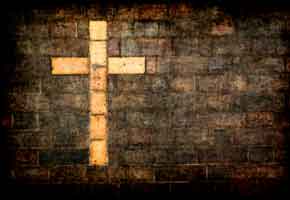 Christ’s Passion, his death on the cross, is an indispensable element of the Christian faith. Doctrines that champion the life of Jesus but fail to affirm the significance of his crucifixion lack the depth and relevance of those that do. A Christ who lives and rises from the dead is a very good Christ indeed. But a Christ who lives, rises from the dead and suffers is a Christ to whom we can relate. God’s son hurts like we hurt. He knows what it means to be human.

As important as Christ’s death is to the Christian faith, the meaning of that event is something that has been debated for nearly two thousand years. The ideas about Jesus’ death are too many to list here, and the arguments too complicated to explore in full. However, the general consensus is that, as tragic as his death was, something really good happened when Jesus died.

Strange as it may be, the idea that Christ’s death is a blessing is something on which practically all Christians can agree. Jesus died and we are glad. For if he had not died, our souls would somehow be poorer for it.

The goodness of Christ’s death–the gift of the Passion–is the beating heart of the Christian faith, and it is not too much of a stretch to say that any doctrine that calls Christ’s death a bad thing has placed itself outside Christianity.

If that is so, why do so many of us Christians feel bad about Jesus’ death?

Yes, we celebrate Easter. Yes, we sing songs of gratitude for Jesus’ sacrifice. But something deep inside us says: It’s our fault he suffered like that. We should be ashamed.

Most of us have heard (or delivered) far too many sermons that reinforce this idea. Preaching about the cross often works hard to convince us that each and every sin we commit adds another weight on Jesus’ shoulders as he hangs there, dying from what we’ve done. Christ’s pain is held up as a demonstration of what our behavior feels like to God. Such preaching tells us that God agonizes over our behavior, and is even outright disgusted with us.

Sometimes Christ is held up as an example of the kind of sacrifice we are supposed to be making in our own lives. Christ gave himself up completely to the point of unimaginable suffering, and we are expected to do the same. Even in cases of extreme abuse, we are simply expected to bear our cross as Christ did and keep quiet.

Other times, we use the Passion to make ourselves and others feel guilty for having less-than-pleasant emotions. If we were really grateful for what God did for us, we reason, we wouldn’t feel so sorry for ourselves, get angry, or grieve.

Beneath these ideas lurks the belief that we have to earn the gift of the cross. Though it may not always be spoken aloud, the assumption is that the “goodness” of Jesus’ death is not a freebie–we have to do something, or think something, or feel a certain way in order to receive Christ’s blessing. By this logic, our very souls are at risk if we don’t behave properly, and rather than offering his death as a gift, Christ died simply to remind us of our obligations to a stern and unforgiving God.

In this way, even though we claim to believe that Christ’s death is Good News, we live, act, and even preach the opposite. In doing so, we flirt with heresy. As we have said, doctrines that call Christ’s death a bad thing place themselves outside the bounds of the Christian faith. In order for Christianity to present a consistent and coherent message of grace to the world, we Christians are going to have to stop abusing the cross.

By definition, gifts are free. If there are any strings attached, it is not a gift. Jesus just died for us. We didn’t earn anything. God simply loves us no matter what.

Strange as it may seem, God’s unconditional love for us makes most of us terribly uncomfortable. So unbearable is the simple fact of God’s love for us that we rush to place as many conditions on it as we can. We prefer to have a system–any system–by which we can earn God’s affection. Unfortunately, the sad truth is that we would vastly prefer to earn our salvation rather than receive it, because earning places us in control.

But by rushing around “earning” God’s love, we trample all over the gift of Christ’s death. How would a father react if his daughter refused to allow him to give her any gifts? Or if every time he gave her something, she said, “No thanks, Dad. I’ll work hard to earn the money, and then I’ll buy it from you”? He might be proud of her work ethic at first, but after years of such behavior, he would notice that his daughter is intentionally placing a barrier between them. She is shielding herself from his love by purchasing what he offers for free. If she lives her whole life this way, she will never have the opportunity to simply sit down with her father and let him give her a gift. She’ll deny her father one of the most basic pleasures of parenthood, for a father’s joy is unsurpassed when his daughter allows him to provide for her.

The real cross we have to bear in this life is not the pain that comes from trying hard to please God, but the slow killing of our own efforts to become spiritually self-reliant. It hurts to give up control and let God be God, but as Christians that is exactly what we are called to do. Whatever our exact views of the Passion are, the work of the cross is already done. Christ’s death is a gift. All that is required of us is to stop doing God’s job and to receive God’s love.