You are here: Home / Resource Center on Emotional and Relational Health / A South African Parable: What About the Bike? 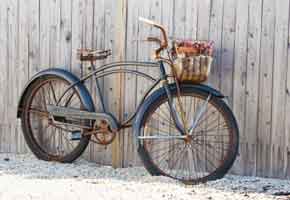 Out of the Truth and Reconciliation process in South Africa, a story has emerged that is told and retold as a parable of the tension between reconciliation and truth, between easy forgiving and authentic forgiveness and restitution. The phrase “What about the bike?” has become shorthand for issues of truth in the process of seeking reconciliation.

James, a fourteen-year-old newsboy, has saved his earnings for three years to finally buy the new bike of his dreams. Two days later he is accosted in an alley by Eric, the white neighborhood bully whose father is a capo of the local mob and whose uncle is the corrupt chief of police. Eric pushes James from the bike with a “Give it up, kid!” and rides off. Powerless to do anything about the theft, James often sees Eric riding his beautiful bike while he returns to his old rusty junker.

Three years later, Eric, having gone through his own series of tough experiences, approaches James and says; “Uh . . . kid, could we talk?”

“Hey, come on. Chill out. Just listen to me for a minute.”

“I don’t want to talk with you. You don’t have anything to say that I want to hear.”

(James is incredulous.) “You…you are apologizing to me? (Then he’s suspicious.) What’s this all about?”

“This may sound weird, but since my dad got killed, my whole life has been turned upside down, and I’ve been trying to sort things out. Well, actually, I’ve been going to church again and, well, I’m trying to make things right with people I hurt…. So, if I hurt you in any way, I want to ask your forgiveness.”

“Yeah. Will you forgive me?”

“That sounds nice and all that. I mean, it may be good for you, but I have a question to ask before we talk about forgiveness.”

“What about the bike?”

“The bike? This isn’t about the bike; it’s about you and me. I don’t have the bike anymore. It’s long gone. Bikes? Hey, they come and they go. This is about you and me, about us, you know? About relationship—”

(Eric continues.) “…And that’s why I’ve come to ask. Will you forgive me?”

“You think that’s all there is to it? You just say ‘I’m sorry’ and you say some nice stuff to make everything OK again, and then we forget about the past and act like nothing’s happened?”

“I have just one thing to say.”

“What about the bike?”