You are here: Home / Resource Center on Emotional and Relational Health / Enough 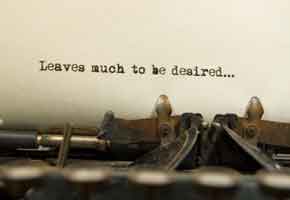 Growing up, I tried to be good enough. My mother traveled often, or at least, to a little kid, it seemed like she was gone a lot. I was supposed to be "acting mom" when she was gone. I cleaned and cooked, and tried very hard to make sure she was pleased and surprised upon her return. But if I made the mistake of leaving even one spatula in the sink, she knew immediately what I had made, and everything was spoiled. I felt like all my effort wasn’t good enough. I learned to be a perfectionist in third grade.

To my father, I never thought I was important enough. He didn’t spend much time at home. He left before the sun was up and we never knew where he went. It could be fun when he was home; at 6 foot 8", he was a human jungle-gym. But he wasn’t really there for the big stuff. If I had plans my mother would object to, all I had to do was ask dad first. I could always count on his standard response – "I don’t care." He forgot my junior high graduation, he wasn’t there for my confirmation. It was clear to me by junior high that I was not important enough to remember.

In high school, I was certainly never pretty enough. I never got asked out on a date, or to school dances, or to the prom. I knew that if I could just go somewhere else, things would be better. The second I was able to escape high school, I packed up my things and headed to college and the promise of a new life.

I chose a new state. I chose a clean slate. Nobody knew me, so I thought I could start over. But no matter how hard I tried to be confident and outgoing, I was still the same me, and I didn’t want to be that "me" anymore. It hadn’t worked before, so I had no reason to believe it would work now. If only I could become popular enough, things would be better.

Sorority life introduced me to Friday night beer busts at fraternities. It was like the door to a cage had opened at last, and I became a free and uninhibited creature. Beer allowed me to shrug off my shy and mousy personality like an old skin, and I became flirty – even confident. There was a reward for this – men paid attention.

My ultimate humiliation came when, in a beer-induced fog, I went home with a friend of an old boyfriend. I thought he really liked me, but to him it was a big joke. He proceeded to share the joke with his entire fraternity. I was a laughingstock. I prayed that a big truck would hit me but it was not to be. And I couldn’t just drop out of college without explaining to my parents.

The door to the cage swung shut.

The only place to turn was to become smart enough; then things would be better. I applied myself to my classes; my professors joked that I would have memorial study halls named after me all over campus because I was so studious. I graduated with good grades, and got the heck off of that campus.

At my first "real" job my shy, self-conscious personality bobbed right back to the surface. People thought I was a snob because I didn’t talk much. But eventually someone invited me to the local bar where the group hung out, and I loosened right up. This familiar groove made it easy to feel secure. I was definitely popular enough. I had a new circle of friends and a man whose attention I was intent upon capturing. Unfortunately, a married man joined up with our little group, and while I was scoping out my elusive man, the married man was baiting a trap for me.

The bait was simple and inexpensive.

He paid attention to me.

Up to this point, I had never given my heart to anyone, mainly because no one had ever asked for it. I had become a master sculptor. I could deftly mold myself into whatever it took for someone to like me. Therefore, the only prerequisite that this man had to meet was to like me. In that respect he surpassed my wildest expectations – he actually professed to love me! But, ultimately, he decided not to leave his wife for me, leaving me to deduce that I was not lovable enough.

Meanwhile, a hole was growing inside of me; a hole that was quickly getting too big to fill. Perhaps I just missed my family, and if I could only get back in close enough proximity to them, things would be better. I moved back near enough to home that I could get in on the big family events. I was back in the bosom of my family, and I actually made new friends quickly. Still, this hole persisted. It was big, cavernous now. Many days my chest actually ached.

At that time I thought that if only I could be desired enough, things would be better. Fortune smiled on me, and I became a dating whirlwind. Friends fixed me up and I sashayed from man to man. But dates never amounted to more than a few weeks of seeing someone. My social life was a pathetic dance step, changing one partner for the next; then step and change partners – step, change. It was exciting to feel so popular, yet the dance left me empty. Some dates professed interest; one even loved me. Unfortunately, I had no love to give – not the kind of love I had read about in romance novels. I needed someone I could love enough.

A change in jobs introduced me to my future husband, and we feel in love at once. We married six months later. We looked like a confident and happy couple. We had strong family ties and good friends. I was making loads of money, we had no financial concerns and life was swell. What I still didn’t see was that the "life raft" I was sitting on had a slow leak in it. My marriage wasn’t based on God; the only god I worshipped was the "In God We Trust" stamped on the back of my money. My definition of success equaled a new car, new house, plenty of bucks in mutual funds, and if life got me down, a trip to Mexico would bring me right back up.

About this time I started having dreams about being in the church I grew up in. I thought that was a sign that I needed to get back in church, so I began going. I didn’t doubt my Christianity. After all, I had been in church and Sunday School every Sunday growing up. I had heard God could meet every need, but even going to church didn’t make it better.

I had everything I wanted, and yet my marriage was going down the tubes so fast that I was surprised nobody else could hear the sucking sounds. It didn’t make sense. I was living right. I had the American dream, and even it wasn’t enough. I was making enough. I was being good enough. I was loved enough. I was going to church enough.

And I was dying inside, now worse than ever. I knew I was drowning, and I knew that I had to get out of this rut or die.

It was then that I decided to become the only thing that was left. Bad enough. None of the other stuff had worked anyway, so I did the only thing I could think of to resuscitate me. I turned to the excitement of a new man. And to my utter dismay, I found out that I couldn’t even fulfill myself by being bad enough, because the second that I was with this new man, I wanted more. I wanted something else. I wanted someone else. Not even the worst sin I could think of was enough to fill the void in me.

That was the end of me. I was broken. I had tried everything I knew to try, and nothing make my life any better. In fact, it just kept getting worse.

This is the second greatest gift God gave me. Only when I was down in that pit, flat on my back, could I finally stop trying to do it myself long enough to look up and listen to what God was telling me I had to be. . .

I had to be weak enough.

And He said to me, "my grace is sufficient for you, for my strength is made perfect in weakness." (II Cor. 12:9)

I had failed in so many ways, that I didn’t understand how this God could possibly love me enough to forgive me. It was then that I heard an analogy that fits my life perfectly.

I was living my life with "shame glasses" on. My life had been stretched out before me like a windshield, but as I looked out, all I could see was the shame and failure of my past. I am learning now that the past needs to be more like a rearview mirror, merely reflecting where I’ve been, instead of looming ahead of me out the windshield, discoloring and tarnishing every place I go.

Slowly I am learning to accept and see the truth – the truth that Jesus loved me enough to die for me, in spite of my failures and my sins. Because of God’s amazing grace, although I have failed, I am not a failure. His love and His word give me hope. The only thing God asks of me is to be humble enough to accept His free gift.

Today, I am not only on the road to recovery, I am on the road home to a loving Father waiting to welcome me into glory. In the meantime, although there are pit stops, stop signs, flat tires, and dead ends on this spiritual journey, there are no u-turns. Because now that I have begun the journey, there is no going back to the empty struggle to be or to have or to do enough. It is enough now to be loved by a gracious and compassionate God – more than enough.