You are here: Home / Resource Center on Emotional and Relational Health / On Forgiveness 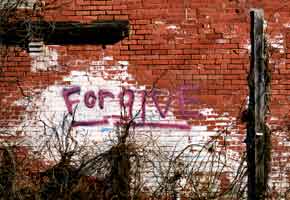 If the topic of forgiveness just triggers panic or fear in you, I understand. It’s not the right time for you to work on this. There are other things to work on first. If you experience forgiveness as a kind of ‘have to’ or if you experience it as a kind of bondage – or even abuse – just skip this issue for now. There may be an appropriate time a little later. But you do NOT have to get this right today. Whatever forgiveness is really about, it is NOT about “getting it right” or doing it “right now” because you are “supposed to.”

It is true that forgiveness can be one of the most important tools of our recovery journey. Properly applied, forgiveness confronts evil with the demands of justice while it responds to dysfunction with grace and healing. It can give hope and it can jump-start reconciliation. It acknowledges and deals honestly with the flaws, failures and fallibility existent in every person and every relationship.

But, it is also true that forgiveness, as it is commonly practiced, frequently morphs into a weapon in the arsenal of dysfunction. It has all too often been destructive instead of constructive. Forgiveness, or what passes for it, can do more harm than good. With subtle self-deception our abuse of the forgiveness process can produce increased injury instead of healing.

As I have looked at forgiveness in my closest relationships I can see that I have often practiced a brand of forgiveness which is tainted by self-deception and destruction. That which was intended to mend became manipulative and damaging.

Early in both my Christian experience and my marriage I was quite fearful of being abandoned. Distance had dominated my childhood and I can now see that I was terrified that adulthood would be a reenactment of the loneliness and rejection I had experienced earlier in life. I longed for a closeness which had largely eluded me. Marriage seemed to be the solution! It seemed like a magic carpet I could ride to places where I would be completely safe from the fear of abandonment. Enter conflict. As conflict inevitably occurred in my marriage I found myself desperate to have some control over my experience of ‘togetherness.’ I was desperate to protect my supply of ‘connection’ and ‘intimacy.’ It is now clear to me that I would do whatever I had to do to ensure I would not be abandoned.

Very quickly I learned a kind of pseudo-forgiveness process that allowed me to control Sara’s distance and to calm my own fears. At the slightest provocation I would rush to ask, “Will you forgive me for _________?” I was taught, and believed, that the more humble and specific I could be, the better forgiveness would work. So, I practiced hard. I was highly motivated. I would do whatever needed to be done to get to the moment when she said “Yes, I will forgive you.” My insecurities and fears would subside for a while but the cycle would soon be activated again and we would dance this strange and meaningless dance many, many times. At the time I managed to trick myself into believing that this was what genuine forgiveness looked like. As I look back on it now, I understand it was a lot more about manipulating Sara to pacify my fears than it was about sincerely owning my wrongs. I passionately and unwittingly sought to give her no option but to calm the fears which our conflict had revealed in me. Pseudo forgiveness became just another kind of controlling behavior. It allowed me to pretend that “everything is all better now” without any need for real change.

Conflicts, sins, disagreements, faults, and failures can not be wiped away by one swipe of the forgiveness rag. That slight of hand does not work. It just buys you a little time, until the next time and the next time and the time after that. It is critical to come to understand that the complicated stuff of repetitive personal failure and addiction is not wiped away so easily. Forgiveness does not necessarily make it all better. When change is needed, forgiving and seeking forgiveness does not by itself produce the change. Surely, it acknowledges the need for change but it does not produce the change. A quality intimate relationship is not built by simply seeking and granting forgiveness. Painful and progressive change over time is required.

Remember forgiveness has it’s own timing. It can’t be rushed. When it comes to forgiveness, it is far better to have a small amount of the real thing than massive quantities of the fake stuff.